Sanitation, disease and humane concerns linked to US pork 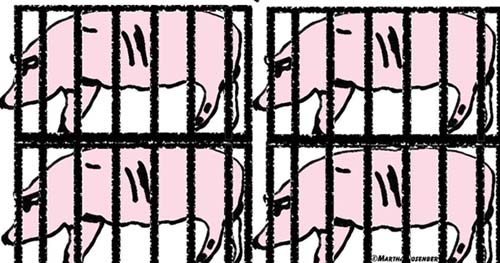 You know things are bad in the pork industry when the whistleblowers aren’t animal rights activists but the government itself. In May, the US Department of Agriculture’s (USDA) Office of the Inspector General exposed extreme sanitation and humane violations in 30 US swine slaughterhouses it visited and in records of 600 other US plants slaughtering pigs.[1]

“During FYs 2008 to 2011, FSIS [Food Safety and Inspection Service, the regulatory agency within USDA] issued 44,128 noncompliance records (NRs) to 616 plants; only 28 plants were suspended, even though some plants repeated violations as egregious as fecal matter on previously cleaned carcasses,” says the Office of the Inspector General report. “In one plant, flies hovered over an area where blood was being collected to be sold for human consumption,” (for products like blood sausage and blood soup). Twenty-two of the 28 plants who were actually suspended were allow to “continue to operate within a short period—some as little as one day after suspension,” says the report. There’s a deterrent for you.

This is not the first time the USDA Office of the Inspector General has sounded the safety alarm about the meat supply. A 2010 report warned that farmers were feeding drug-laced milk, banned for human consumption, to calves. [2] “When the calves are slaughtered, the drug residue from the feed or milk remains in their meat, which is then sold to consumers.” Two years earlier, an OIG report warned that USDA officials “believed the sanitizer spray was sufficient” to kill the prions that spread Mad Cow disease.[3] Prions are not inactivated by cooking, heat, autoclaves, ammonia, bleach, hydrogen peroxide, alcohol, phenol, lye, formaldehyde, or radiation!

The OIG swine report comes as US regulators consider the proposed acquisition of 87-year-old Virginia-based Smithfield foods by Shuanghui International. If approved, the $4.7 billion deal would be the biggest takeover of any US firm, not just a food company, by a Chinese company.[4] Some worry Smithfield will suffer from China’s scandal-ridden food climate in which thousands of pig carcasses were recently seen in a river that supplies Shanghai’s drinking water and rat meat was billed as lamb.[5] (And don’t forget the US pets killed from tainted Chinese dog food in 2007 [6]) But others say the US hog industry has managed to eliminate all wholesomeness, purity, ethics and animal welfare without China’s help.

Here are some of its worst features.

You don’t have to be a mathematician to conclude that if a plant slaughters 19,000 pigs a day, the line moves pretty fast. OIG officials write that “Inspectors are required to check ‘the head, tail, tongue, thymus gland, and all viscera of each animal slaughtered . . . [and to] observe and palpate the mesenteric lymph nodes’ as well as ‘grasp, turn, and observe both sides of the kidneys’ to find parasites, inflammation, swelling, or masses that might indicate disease.” But some inspectors are sleeping on the job, says the report. Two inspectors who failed to palpate kidneys and lymph nodes said they were “distracted,” a third had a “history of performance issues,” according to the plant and a fourth was “new.” Another risk is a new plan called HACCP Inspection Models Project that stresses microbiological tests on a sampling of carcasses rather than visual checks on all animals. (HACCP has been called a gift to industry from regulators.) “We question whether this is a better measure for food safety,” says the report because it can’t catch “tuberculosis nodules embedded within the lymph nodes, parasites within the intestine, and inflamed or degenerated organs that are unusually sticky to the touch or excessively firm.” Yum.

When it comes to filth, the Jungle, the turn of the century muckraking novel about Chicago slaughterhouses that drove the first meat safety laws, is still the law of the land. One slaughter plant visited by OIG officials received repeat citations for violations like “fecal contamination on a hog after the final trim,” “grease smears” or “black colored liquid substance” on processed meat; and 43 repeat violations for “pest control problems, such as cockroaches on the kill floor.” At a different plant, an inspector “observed yellow fibrous fecal material on the left hind foot of one carcass” which had “moved past the plant’s quality control employees without being detected.” At still another plant, an inspector neglected to mark a tray of viscera “inedible” that had been contaminated “when a plant employee cut through the rectum while removing the viscera for inspection.” What are slaughterhouse conditions like when OIG inspectors are not present, the reports asks repeatedly, since their presence was well known to plant managers during their visits.

In 2006, Rolling Stone magazine ran an exposé about Smithﬁeld hog operations with a photo of a mountain of dead, pink pigs, that many still remember.[7] The liquid in the infamous “holding ponds” of manure on hog farms is not brown, wrote author Jeff Tietz—it is actually pink thanks to the “interactions between the bacteria and blood and afterbirths and stillborn piglets and urine and excrement and chemicals and drugs.” To alleviate swelling lagoons, workers sometimes “spray the waste on surrounding ﬁelds, which results in what the industry daintily refers to as ‘overapplication.’ This can turn hundreds of acres—thousands of football ﬁelds—into shallow mud puddles of pig shit. Tree branches drip with pig shit,” wrote Tietz. In 2004, the Chicago Tribune’s Andrew Martin reported similar sanitation horrors at the HKY Farm in Bloomﬁeld, Nebraska.[8] “Dozens of dead piglets are dumped in piles or encased in pools of manure beneath the ﬂoor, having drowned there after falling through a hole,” he wrote. “Dead hogs remain in their cages, discarded and stiff in walkways or rotting in pens as other pigs gnaw at their carcasses.”

4. Drugs—Not on the label but in the meat

Veterinary drugs given to animals on factory farms whether antibiotics, antiparasite and fungal drugs, vaccines, heavy metals and additives in feed (to impart color to meat) or growth promoters do not appear on labels. But one drug used in 45 percent of US pigs since 1999 to promote leanness is especially worrisome. Unlike most veterinary drugs which have to be withdrawn before slaughter, ractopamine is begun in the days before slaughter and never withdrawn.[9] Three years after ractopamine’s approval, the FDA accused its manufacturer Elanco, Eli Lilly’s animal subsidiary, of withholding information about “safety and effectiveness” and “adverse animal drug experiences.” Elanco, said the FDA in a 14-page warning letter, failed to report furious farmers phoning the company about “dying animals,” “downer pigs,” animals “down and shaking,” “hyperactivity,” and “vomiting after eating feed with Paylean [ractopamine].” In 2009, the European Food Safety Authority (EFSA) termed ractopamine a cardiac stimulator capable of causing undue stress and health risks in animals.[10] The journal Talanta said there was, “potential hazard for human and animal health.” And a report from Ottawa’s Bureau of Veterinary Drugs says that rats fed ractopamine developed a constellation of birth defects like cleft palate, protruding tongue, short limbs, missing digits, open eyelids, and enlarged hearts.

In the US hog industry, animals live under such unnatural conditions and are treated with so many drugs, scientific phenomenon are developing that actually baffle scientists. In 2007 and 2008, 24 workers at Quality Pork Producers (QPP) in Austin, Minnesota, Indiana Packers Corp. in Delphi, Indiana, and Hormel Foods Corp. in Fremont, Nebraska, came down with a mysterious autoimmune disease doctors dubbed Progressive Inflammatory Neuropathy or PIN.[11] All employees had jobs using compressed air to turn hog brains into a slurry for the overseas food markets and were exposed to aerosolized brains.[12] PIN caused tingling and numbness of the limbs and progressive weakness sometimes leading to wheelchairs, hospitalization and paralysis. Some PIN patients stabilized or improved but others didn’t. One worker improved after a period of rehabilitation, reported a medical journal but “a few months after returning to work developed the polyradicular pattern experienced by other workers,” and relapsed. Meanwhile, in the last few years, a foam-like “gray bubbly substance” has appeared on top of hog manure in factory size hog farms, reports Mother Jones[13] and has caused at least six explosions and a fire that took many animals’ lives. Scientists cannot explain the foam, which grows to a thickness of up to four feet and pulsates with apparent microbial activity. It sounds like something that would be grown in a test tube—except that the test tube is the size of a factory farm.

You can’t talk about slaughterhouses without talking about cruelty. The Humane Methods of Slaughter Act of 1958 was passed to prevent excessive cruelty to animals and requires that they be made insensitive to pain before being “shackled, hoisted, thrown, cast or cut.” Whether or not an animal is properly stunned and insensible to pain is easy to determine, writes Temple Grandin, the animal expert in her “Animal Welfare and Humane Slaughter guidelines.”[14] A properly stunned animal will not vocalize, kick, flop its head, exhibit rhythmic breathing or blink and if it does, it needs to be restunned, says Grandin. Of course whistleblower and newspapers reports often show that stunning is a detail lost in cut rate production. And so does the May OIG report. “An inspector observed an attempt to stun a hog with a captive bolt gun,” it reads. “It appeared to misfire and became lodged in the hog’s skull. The hog remained conscious and aware while the plant sent for another gun, which was about 2 minutes away. The second gun also appeared to misfire causing the hog to squeal, but it remained conscious and aware. The hog then managed to dislodge the first gun from its skull. Ultimately, a portable electric stunner had to be used to successfully render the hog unconscious.” The incident was one of several violations of the Humane Methods of Slaughter Act described in the OIG report. The plant was not suspended.

Martha Rosenberg is a freelance journalist and the author of the highly accalimed “Born With A Junk Food Deficiency: How Flaks, Quacks and Hacks Pimp The Public Health,” published by Prometheus Books. Check her new Facebook page.

This entry was posted in Agriculture, Health. Bookmark the permalink.