The many-tentacled Kraken of present-day fascism

Counter-intelligence and counter-terrorism analysts make a dangerous mistake when they lump all of the present-day fascist movements—of which there are several—under one monolithic description. The manifestation of fascism within American politics, with the Republican Party now clearly espousing fascist and anti-democratic principles, has resulted in various fascist factions vying for political control of both the party and national, state, and local government.

Bannonism is a more internationalist form of fascism embraced by former Trump political strategist Steve Bannon. Bannonism hopes to create an international fascist movement that is not much different from the goals of Nazi Germany’s “New Order” in creating a world fascist state. Bannonism’s internationalist fascism, therefore, runs counter to the America First nationalism of Trumpism. Embedded within Bannonism is the far-right Catholic political activism of the Opus Dei sect. Bannon and Opus Dei are allied against the policies of Pope Francis I. There are also close links between Bannon and the Italian Lega Nord neo-fascist Salvini and the exiled Chinese fascist billionaire Guo Wengui. Guo leads a fascist movement that seeks to establish a Federal State of New China after overthrowing the People’s Republic of China. This represents a resurgence of the fascist doctrine of Generalissimo Chiang Kai-shek’s Nationalist Blue Shirts Society of the 1920s and 30s. 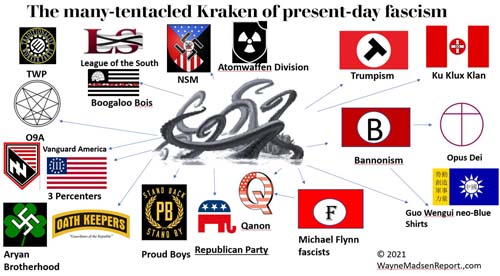 There is a more traditional military fascist tendency by retired Army Lieutenant General and Trump’s former national security adviser Michael Flynn. Flynn and his supporters, many of whom are either retired or former military, are committed to a fascist military dictatorship taking over the United States. In December 2020, Flynn called for military martial law and a military regime re-running the 2020 election to benefit Trump and the Republicans. Flynn later agreed that the United States would be better off with a Myanmar-style military coup that would restore the White House to Trump. Flynn continues to enjoy widespread support within the U.S. military and law enforcement. This type of influence was recently seen in a U.S. Navy counter-terrorism training document that referred to “socialists” as “terrorists.” Flynn fascists are particularly dangerous because of their penetration of the military. While the director of the Defense Intelligence Agency (DIA), Flynn was able to employ “controlled behavior” tactics as part of DIA’s strategic and tactical “influence operations” targeting various nations and groups around the world. Flynn had access to various highly-classified behavioral modification programs while the head of DIA. These include those involved with “mental reorientation,” autosuggestion techniques, behavior manipulation and control through mass media, subliminal perception, and other psychological warfare techniques. Flynn, who has helped—along with members of his family—to perpetuate Qanon conspiracy myths as fact, may be using Qanon as an influence operation to further radicalize the American right. In fact, Qanon resembles a classic psychological warfare operation and it may be an actual manifestation of one of Flynn’s DIA programs. And that, by itself, makes Flynn the most dangerous fascist leader, aside from Donald Trump.

Military veterans and retirees, as well as current and former law enforcement officers, have been attracted to several misogynistic groups like the Proud Boys, Boogaloo Bois, Oath Keepers, and Three Percenters (III%). Many of these adherents are also Incels (involuntary celibates), the most extreme of misogynists. These groups are akin to the Nazi Brown Shirts, Sturmabteilung or “Storm Detachment,” of the 1930s. The SA was composed of several misogynists, including its leader, Ernst Röhm, who, like many of his lieutenants, were also homosexuals. One of Qanon’s oft-used prognostications is “The Storm is Coming.” The “storm” usage is taken directly from the jargon of the old and neo-Nazi movements.

The Proud Boys and Oath Keepers are linked directly to such far-right media propagandists as Tucker Carlson of Fox News, Alex Jones and Roger Stone of Infowars, and One America News (OAN). Keep in mind that Flynn’s experience in using influence operations techniques developed by DIA may be the reason why these and other far-right media operations are ket to the success of the modern fascist movement in the United States and its almost-complete takeover of the Republican Party. The extremely violent III Percenters are linked to at least one member of Congress, Rep. Lauren Boebert (R-CO).

Even more violent far-right groups actively target government officials and law enforcement for assassination. These groups include the Boogaloo Bois and the Order of the Nine Angles (O9A). These occult-oriented groups idolize both Adolf Hitler and Osama Bin Laden.

Other far-right groups are, in a sense, more “traditional” in that they are follow-ons to the American Nazi Party and Ku Klux Klan. These include the National Socialist Movement (NSM), the leading neo-Nazi organization in the United States and the Nationalist Front, which includes the NSM, the Traditionalist Workers Party (TWP), and the neo-Confederate League of the South. All were among the “very fine people” Trump referenced as being part of the “United the Right” rally in Charlottesville, Virginia in 2017. Other far-right “usual suspects” include the Atomwaffen Division, also known as the Nationalist Socialist Order (a terrorist group that also maintains units in Canada, Britain, Germany, the Baltic States, Russia, and Italy); Vanguard America; the Aryan Brotherhood (which is very active among the white federal prison population in the United States—and something that may be prompting the Department of Justice to seek non-prison plea deals rather than prison terms for the January 6, 2021 insurgents who seized the U.S. Capitol); and the Ku Klux Klan and its various branches and off-shoots.

Not since the days of the Weimar Republic of Germany has a democratic country—in this case, the United States—faced such a threat from a determined and well-entrenched fascist bloc. It’s well past time for America to get real about the threat of fascists who live and operate among us.