Ray McGovern brutalized and left bleeding by Hillary Clinton police, ‘So this is America!’

To those who second-guess our police state status: shame on you!

I just received the following news and I am way too upset to write a coherent piece on this.

Ray McGovern is a good friend of mine. We live less than 10 miles apart. Together we have participated in many events and protests. He is one of the most informed, articulate, gentle, peace-loving and peace-seeking human beings I’ve ever known . . . For me, this hits too close to home: My father was similarly brutalized by dictator regimes, and that was only the beginning, before it escalated to being tortured and having his toenails pulled out by the state police. Why? He was a doctor, a surgeon with an inquiring mind, and he spoke out whenever he could against dictatorships and for liberties. Participating in peaceful demonstrations, encouraging others to rise up for their rights, and reading authors such as Steinbeck (the American author black-listed there as ‘communist and anarchist’) landed him on the list of to-be-punished and pacified . . .

Right now, at this point, all I have to say to those who second-guess our nation’s police state status is this: “Shame on you!” As for my irate minority friends over here at Boiling Frogs, please help disseminate this news, because the scum bag media won’t;’ thank you.

As Secretary of State Hillary Clinton gave her speech at George Washington University yesterday, condemning governments that arrest protestors and do not allow free expression, 71-year-old Ray McGovern was grabbed from the audience in plain view of her by police and an unidentified official in plain clothes, brutalized and left bleeding in jail. She never paused speaking. When Secretary Clinton began her speech, Mr. McGovern remained standing silently in the audience and turned his back. Mr. McGovern, a veteran Army officer who also worked as a C.I.A. analyst for 27 years, was wearing a Veterans for Peace t-shirt.

Blind-sided by security officers who pounced upon him, Mr. McGovern remarked, as he was hauled out the door, “So this is America?” As you see, Mr. McGovern is covered with bruises, lacerations and contusions inflicted in the assault. 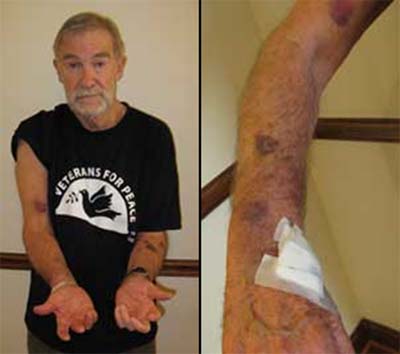 Mr. McGovern is being represented by the Partnership for Civil Justice Fund (PCJF). “It is the ultimate definition of lip service that Secretary of State Clinton would be trumpeting the U.S. government’s supposed concerns for free speech rights and this man would be simultaneously brutalized and arrested for engaging in a peaceful act of dissent at her speech,” stated attorney Mara Verheyden-Hilliard of the PCJF.

In addition to publishing Boiling Frogs, where this article originally appeared, Sibel Edmonds is the founder and president of the National Security Whistleblowers Coalition (NSWBC), a nonprofit organization dedicated to aiding national security whistleblowers. She has appeared on national radio and TV as a commentator on matters related to whistleblowers, national security, and excessive secrecy & classification, and has been featured on CBS 60 Minutes, CNN, MSNBC, NPR, and in the New York Times, Washington Post, Vanity Fair, The American Conservative, and others. Her book, ‘Shooting the Messenger,’ co-authored with Professor William Weaver, is forthcoming from Kansas University Press in the fall of 2010.

2 Responses to Ray McGovern brutalized and left bleeding by Hillary Clinton police, ‘So this is America!’